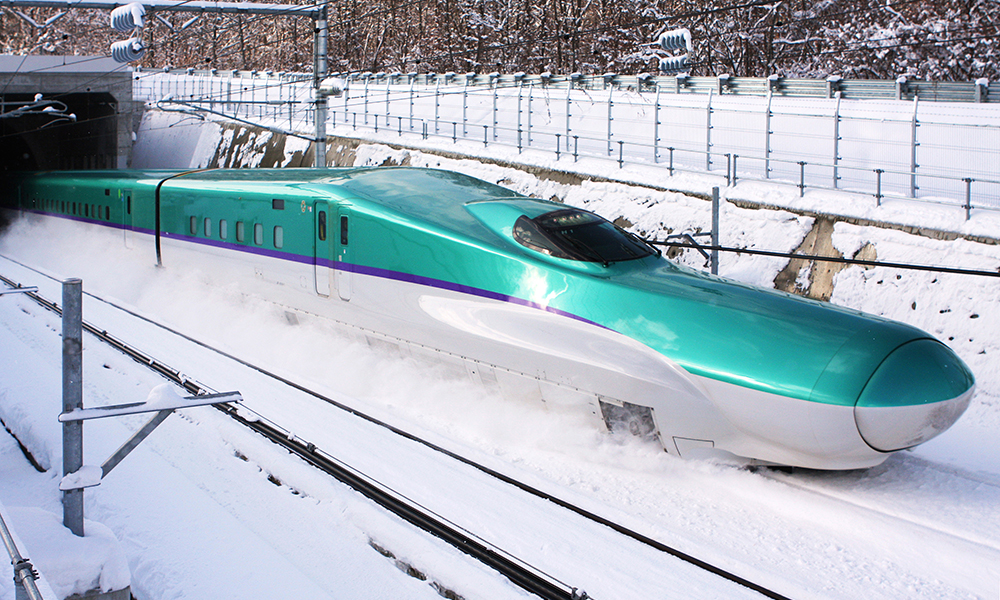 Rail travel is one of the most efficient ways of across Japan. Aside from the famous high-speed Shinkansen services, there are also many regional lines connecting cities, prefectures regions together. Japanese trains may stand out from their efficiency and convenience alone, there are more features which set them apart from other rail systems around the world.

You can tour Japan by train with your Japan Rail Pass since the entire JR train network is available with your JR Pass.

Japan’s 47 prefectures are connected by a vast array of rail lines, making rail travel amongst the easiest ways of getting around Japan. Most of these are operated by Japan Railways Group – more commonly known as Japan Rail or JR – who operate throughout the four main islands of Japan. They also operate bus lines in certain areas.

One aspect of Japanese railways of interest are the many types of trains which run along the 16,944 miles – 27,268km – of tracks.

The most famous of the trains you may find on Japanese rails is the Shinkansen (新幹線). Named for the lines they run on, these trains are designed with aerodynamics and speed in mind. Known to most of the world as bullet trains, these locomotives can travel at up to 275 mph (443 km/h). This breathtaking speed can take commuters and travellers alike between Tokyō and Ōsaka – a distance of 498 kilometres or 309 miles – in just under four hours. In comparison, driving between the cities could take two or more hours longer than that. An added bonus is that you can focus on the beautiful scenery as you pass iconic sights such as Mt Fuji, rather than having to focus on the road.

Shinkansen trains are known for their sleek design and eye-catching decals, many of which run for a limited time before being replaced with another design. For example, the 500 Type Eva model, based in part on the anime series Neon Genesis Evangelion, features a striking purple and green paintwork said to make it resemble a purple snake. This train ran along the Ōsaka-to-Hakata Sanyō line with stops in cities including Kōbe, Okayama until it ceased operations in 2017.

There is a new model of bullet train based upon Hello Kitty, launched in 2018, complete with pink exterior decals and pink interiors dotted with images of Hello Kitty herself. This train, like the 500 Type Eva train before it, travels along the Sanyō line under the names Kodama 730 (Hakata-Ōsaka) and Kodama 741 (Ōsaka-Hakata). The first car – called the Hello! Plaza – features a food store with local food and souvenirs from the Kansai and Sanyō regions and Kyūshū island, where the train line is located. There is also official merchandise based on the new Hello Kitty mascots for the train line.

The second car – the Kawaii! Room – is home to a life-size model of Hello Kitty wearing a Shinkansen attendant uniform, as well as walls covered in Hello Kitty and pink ribbon decals. This includes a map of southwest Japan with the cute new Hello Kitty mascots for each prefecture, holding a food item associated with that prefecture; for example, the mascot for Shimane is holding a Shiijimi , which is a regional delicacy there. This car has a photo opportunity area for Instagram pictures. The other cars are passenger cars, all with pink and purple seats and a Hello Kitty napkin on each headrest. There are plenty of cute decals on the walls and windows of all passenger cars, so keep a !

Even faster than the Shinkansen trains are the Maglev trains. As these trains are propelled by magnetic fields rather than by wheels, there is no friction to slow these locomotives down. Currently there is only one operating public maglev line – the Linimo line which runs on the outskirts of Nagoya – however, the Chūō Shinkansen line (not to be confused with the Chūō Main Line) which is due to finish construction in 2027 will take passengers between Tokyō and Nagoya at speeds even faster than the existing bullet trains. Although this is far off, especially with the extension to Osaka not due to be finished for around 20 years, it’s something to look forward to in the world of rail travel.

The fancy cross-country Shinkansen trains don’t get to keep all the glory . Some regional trains have also been the of attention due to their design or . A rather famous example is the “Pokemon With You” train, a regional train running the 2-hour route between Ichinoseki and Kesennuma in the Tōhoku region, intricately decorated with everything Pikachu. Even the interiors are filled with Pikachu plushies of various sizes, and the bright yellow exterior is covered in happy Pikachus. These themed trains are not limited to Japanese anime; a Moomin-themed train runs along the Isumi line in Chiba Prefecture. The vintage train model, built in the , was chosen as its front was thought to resemble Moomin’s face.

Awesomely themed trains are one of the reasons why Japan’s rail system is so fun, however the convenience and simplicity of rail transport in Japan cannot be ignored. With amazing speed, views and atmosphere, Japanese train services offer so much for any tourist, visitor or resident in Japan.