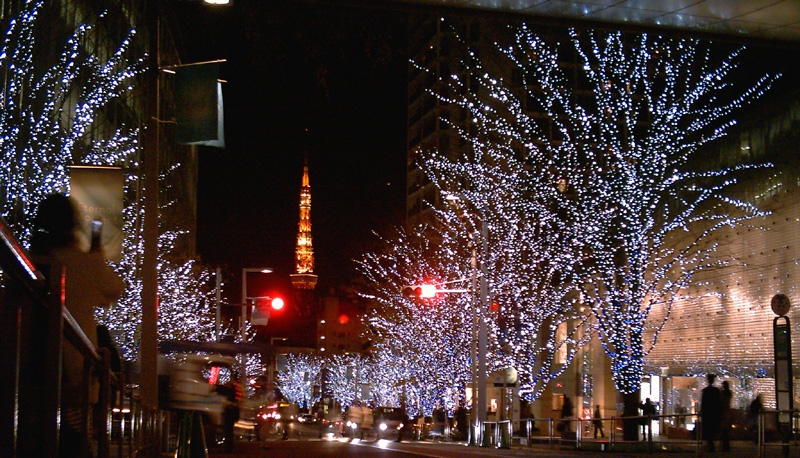 Christmas in Japan (known as kurisumasu; クリスマス) is an extravagant and exciting affair full of many unique and fun things. Amongst the Japanese version of a Christmas dinner and the romantic atmosphere, Christmas is a lovely time of year to encounter in Japan.

The first Christmas decorations is Japan usually go up during November. Christmas trees and lots of lights line the streets of any city, so walking around town will surely fill you with festive joy and wonder. Illuminations can be observed all over the country; famous locations include Nakadori Street’s lit-up trees near Tokyo Station, Caretta Shiodome near Ginza, Midosuji Street’s amazing illuminations in Osaka, and Nagoya’s Nabana No Sato light festival. Light festivals can be found in many cities and Christmas lights line many a street. Furthermore, stores throughout Japan will have Christmas decorations and festive sales, so make sure to grab a bargain as a gift or for yourself!

Beautiful decorations aren’t just limited to the streets either; most Japanese homes will have a Christmas tree covered in lights during this time. Christmas trees are purely decorative however; presents are not placed underneath the tree. Instead, stockings are the preferred way to store Christmas gifts.

Christmastime is like a second Valentine’s Day for Japanese couples. Dates and romantic nights in alike are usually extravagant and extra-special at this time of year. Romantic gifts are exchanged by couples on Christmas Eve, and Christmas is often romanticised in pop songs, anime and TV dramas. It is also a special day for families, with parents giving gifts to their children.

Common gifts include chocolate, sweets, alcohol, cosmetics, mugs, and other useful items. Local specialties such as a local type of sake, or souvenirs and edibles from your homeland are also appreciated gifts. Chocolates are especially associated with couples, with stores often selling bags of small festively-wrapped chocolates to give to your lover. However, chocolates are an acceptable gift for anybody and are sure to make your recipient happy.

Foreigners should be aware that there is a specific etiquette to gifting in Japanese culture. For example, gifting shoes, watches or stationery is considered a faux-pas. Making sure the gift is wrapped neatly with a ribbon and handing any gifts to their recipient with both hands are also very important. It is customary to refuse the gift twice before accepting it as a sign of politeness, as well as to announce that you have a gift when entering the recipient’s home or presence but not to give it until you leave.

A fact that surprises many foreigners in Japan is their take on the classic Christmas dinner. Believe it or not, many Japanese families eat fried chicken for their Christmas dinner. A practice originating in the 1970’s, KFC is insanely busy in Japan around the festive period and take Christmas orders months in advance. Aside from the typical fried chicken which is insanely popular, KFC also launch a special festive menu with more luxurious chicken dishes such as roast chicken in wine sauce especially for Christmas orders to eat alongside the classic KFC menu items. This makes sense in Japan as many kitchens do not have ovens, and ovens large enough to roast a chicken or turkey are very hard to come by in homes. Turkey is extremely hard to find in Japan too, as it is simply not farmed or eaten there. Therefore, families choose the nearest substitute – chicken – and look to businesses to cook it for them in their ovens. Pre-bookings can begin as early as September, and special Christmas options can sell out fast.

Aside from their unique Christmas dinner traditions, the Japanese love to eat cakes at Christmastime. Christmas cake – a sponge cake topped with cream and strawberries – is as ubiquitous as Christmas pudding in the UK. Traditional European festive treats such as stollen are also popular as Christmas desserts. Of course, there is also plenty of chocolate to eat if you’re still hungry.

Christmas specials on TV are extremely popular in Japan. Many long-running anime series have special festive episodes which air alongside classic Christmas films, including several American classics translated into Japanese. Board games are also popular, similar to the western world, with families competing over traditional games such as Hanafuda (a card game) or Gomoku (a game similar to Connect 4 but played on a Go board), as well as more modern board games like Monopoly.

Christmas in Japan is a fun, unique and special affair. Being lucky enough to visit Japan during this period will provide you with so many amazing things to do and see. Make sure to see the illuminations, enjoy some fried chicken and get into the festive spirit!